Learning a new language is always a little scary at first, especially when we do not know how or where to begin. 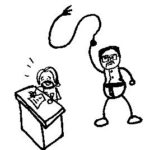 As a general rule, lacking confidence in doing something new is a mentally stressful experience that provokes disagreeable feelings. These feelings are similar in some ways to being without a plan when confronted by a situation that provokes fear. The outcome in both instances can be less than we would have hoped for. When saddled with feelings of doubt, we encounter new limitations in learning the task and as a result, performance suffers.

On the other hand, when we triumph over a difficult situation, it is the result of having a positive attitude in overcoming the problem in the first place. The positive attitude knows that fear or lack of confidence will only limit those options and abilities that lead to success. From our own experiences, most of us would say that we have already used this method of confronting a fearful situation. It’s the same
when it comes to learning a new language by the traditional mode.
Most traditional methods of teaching Spanish are based on the use of methods that force the student to learn the rules of grammar first and subsequently to apply those rules in speaking Spanish. The experience for the student can often be a disagreeable one that results in a lack of confidence in the process and this often leads to a lack of motivation. In this scenario the student is often afraid to engage fully in acquiring the language, feeling that no real learning is taking place. It can be a very frustrating experience.

But what happens if we reverse the process and first we focus on “communicating” in Spanish and put aside learning those rules of grammar for later? This can be much more fun as the student acquires a positive feeling for the language a lot sooner than by the traditional teaching method. The confidence gained by this alternative process allows the student to participate and take an active role in the learning process of acquiring the Spanish language. You allow it to develop to the extent that you want. There are no limits if you want it.

We can help you meet your goals in Spanish!

Welcome to WordPress. This is your first post. Edit or delete it, then start blogging!